Two-Handed Voicings Part 2 - "So What" and Pure Fourth Voicings

Two-handed voicings are an essential element of jazz piano. Most often used for comping, two handed voicings are integral to solo playing, improvising and arranging. Based on a transcription of Red Garland improvising over the title track of John Coltrane's 1957 album with the Red Garland Trio "Traneing In," Part 1 introduces the versatile open fifth voicing technique. Part 2 derives "So What" two-handed voicings from a transcription of the tune of the same name from the classic 1959 Miles Davis recording "Kind of Blue." Part 3 explores the rich, bitonal sounds of upper structure triads.

The music on Miles Davis' "Kind of Blue" was influential on many levels: it ushered in the style of modality, it introduced a new voice to jazz piano, Bill Evans, it established several new standard tunes to the repertoire and went on to become the best selling jazz album of all time. It's influence extends literally down to the piano voicings that Bill Evans played on one of the most popular tunes on the recording and in all of the jazz repertoire, "So What." Known as "So What" voicings, the notes of these two-handed chords are arranged with a major third above a stack of perfect fourth intervals. "So What" voicings confer a modern sound and are a versatile two-handed voicing technique that can be used equally as well for comping or solo playing.

In this lesson, the "So What" voicings are derived from a transcription of Bill Evans' comping the changes to their namesake tune and their use is applied to traditional tonal progressions. A closely related technique of voicing chords using only fourth intervals is explored as well, synthesizing both techniques into a unified method for two-handed chord voicings.

Watch this short video for an overview of the content of this course.

Start a discussion with fellow students by clicking on the discussion link in your student control panel to leave a message or search previous conversations.

Consult the Lesson Road Map to for a suggested sequence of lessons.

To continue your study of this topic, face-to-face, live webcam lessons are available.

"Your site is awesome! I've gone through many jazz theory books. No book can compare to seeing an example being executed and having a human voice explain the examples. Also the quizzes, and extra pop up windows are great. It's like having a teacher by your side. I will definitely be signing up for a longer term" -Emory 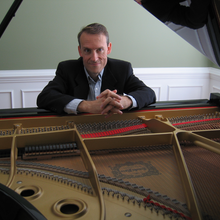 Bill did undergraduate work at the Berklee College of Music and holds the M.Mus. degree in Jazz Studies from the Boston Conservatory/Berklee College of Music where he studied with Ray Santisi and Charlie Banacos. Bill taught and played extensively around the Boston area for the better part of two decades appearing everywhere from the legendary Ryles Jazz Club in Cambridge MA to a long stand at the Hampshire House on Beacon Hill in Boston before relocating to the Raleigh-Durham NC area where he teaches full-time on JazzPianoOnline.com.

We suggest moving this party over to a full size window.
You'll enjoy it way more.
Close
Go Fullscreen